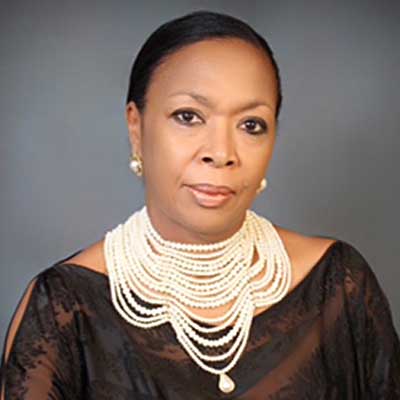 She started her career in 1982 with ICON Merchant Bank Ltd as a Banking officer. She ventured into the property space in 1983 and worked with Ashland Oil Nigeria Company and A.A. Adebayo & Associates. She garnered extensive experience in the real Estate industry and today is a force to be reckoned with.

She briefly set aside her love for Real Estate from 1999-2003 when she served her homeland as the First Lady of Ekiti State. In this period she showed her passion for the underprivileged in the society by various acts of philanthropy. She is the founder and initiator of the Erelu Adebayo Children’s Home Iyin-Ekiti as well as the Chairman Erelu Adebayo Foundation for the underprivileged.

She serves on the Boards of Dangote Foundation, Afriland Properties, Meyer Plc, Greenwich Trust Limited and Women at Risk Foundation (WARIF), where she is the Chairman. She served previously on the Board of WEMABOD as the first female Chairperson. A feat also repeated as one of the first female members of the council of the NSE.

Erelu has received awards attesting to her stellar qualities as a Philanthropist and firm believer in excellence. These include Lagos State Award Eko 2012, ThisDay Award for service to Nigerian Children 2012 and many others.

Her immense contribution to the Ekiti Homeland has been recognised by the conferment of two prestigious traditional titles; Aare Erelu of Ado-Ekiti and Erelu of Iyin-Ekiti. She is indeed a deserving daughter of Ekiti State.

Erelu Angela Adebayo is happily married to Otunba Niyi Adebayo (CON) and they are blessed with 3 children.